Leonardo Bonacci (c. 1170 – c. 1250) - known as Fibonacci - was an Italian mathematician considered to be the most talented Western mathematician of the Middle Ages.

Fibonacci popularised the Hindu–Arabic numeral system in the Western World. In his book Liber Abaci (1202), he introduced the so-called modus Indorum (method of the Indians), today known as Arabic numerals. The book was well received throughout educated Europe and had a profound impact on European thought.

Liber Abaci also posed, and solved, a problem involving the growth of a population of rabbits. His explanation of their breeding patterns, generation by generation, relied on a sequence of numbers later known as Fibonacci numbers.

In the Fibonacci sequence, each number is the sum of the previous two numbers, thus:

The ratio between any two successive Fibonacci numbers is very close to the Golden Ratio, approximately 1.618034.

Representations of this numeric sequence occur elsewhere in nature, including in intersecting spirals of many seed heads, as well as cow and bee breeding patterns, sea-shell and snail shell spiral proportions and branching and petal numbers on plants (although not always).

Nature's development of seedheads in this formation creates an arrangement allowing the tightest packing of the seeds so that, no matter how large the seed head, they are uniformly packed, all the seeds being the same size, and there is no crowding in the centre. At the same time, seeds do not become thinly spread towards the edges. 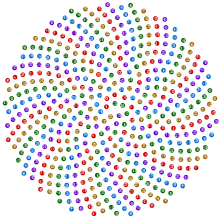 Analysing a pine cone from its base, or a pineapple, will reveal similarly the spirals of adjacent Fibonacci numbers.

Sources: The above information has been derived from Wikipedia entries.